Trainmen collect just about anything found on these 730 notes.  While Type and Variety are collected by collectors of general Confederate currency, Trainmen specialize in collecting by Date of Issue, Signature Combination, Interest Paid Stamp and Manuscript, Issued Manuscript and Stamp, Names, Places, Civil / Military and the list goes on.  We have dedecated pages to most of those collecting interests; but, felt we were leaving something out.  This page is dedicated to the 'Other Stuff' that we find on these 730 Notes.  The "Odd & Curious" as some like to call it.  It doesn't really fit into any of the other categories and is still of significant interest.  Some of these items were applied 1862-1863.  Others were applied post-War.  Most of those date to late 1870s until the turn of the Century.  Most post-War are advertising of some type.  The notes were abundant and were the perfect medium for attracting attention. 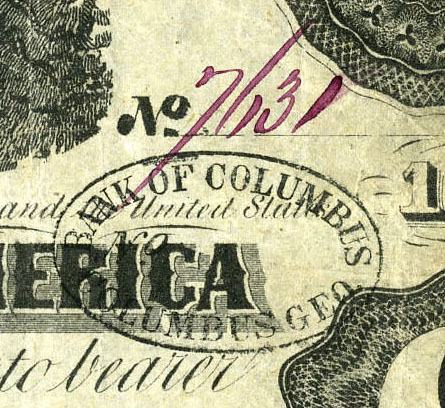 Bank of Columbus - Columbus, Georgia
This is a period bank stamp c. 1862-1863 on Train (T39)
This stamp said the bank had received and paid out this good (genuine) note!
Entire Note

Mobile Savings Bank
This is a period stamp that denotes "From"
circa. 1861-1863 on Train (T39)
This bank was a Depositary (entity) & Depository (place)
The word PAID has been removed.  Notice part of the P is still visible
It too indicated the note was genuine, that it had been received and passed back out. 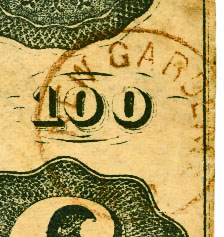 New Garden, NC was a quaker town in Guilford County.  Its first post office opened in 1814 and operated until 1889 when the town name was changed to Guilford College.   J. R. C. Faucett was appointed CSA Postmaster of New Garden on March 4, 1862, and the CSA office remained open until around April 30, 1865.  (research by Roger Adamek) 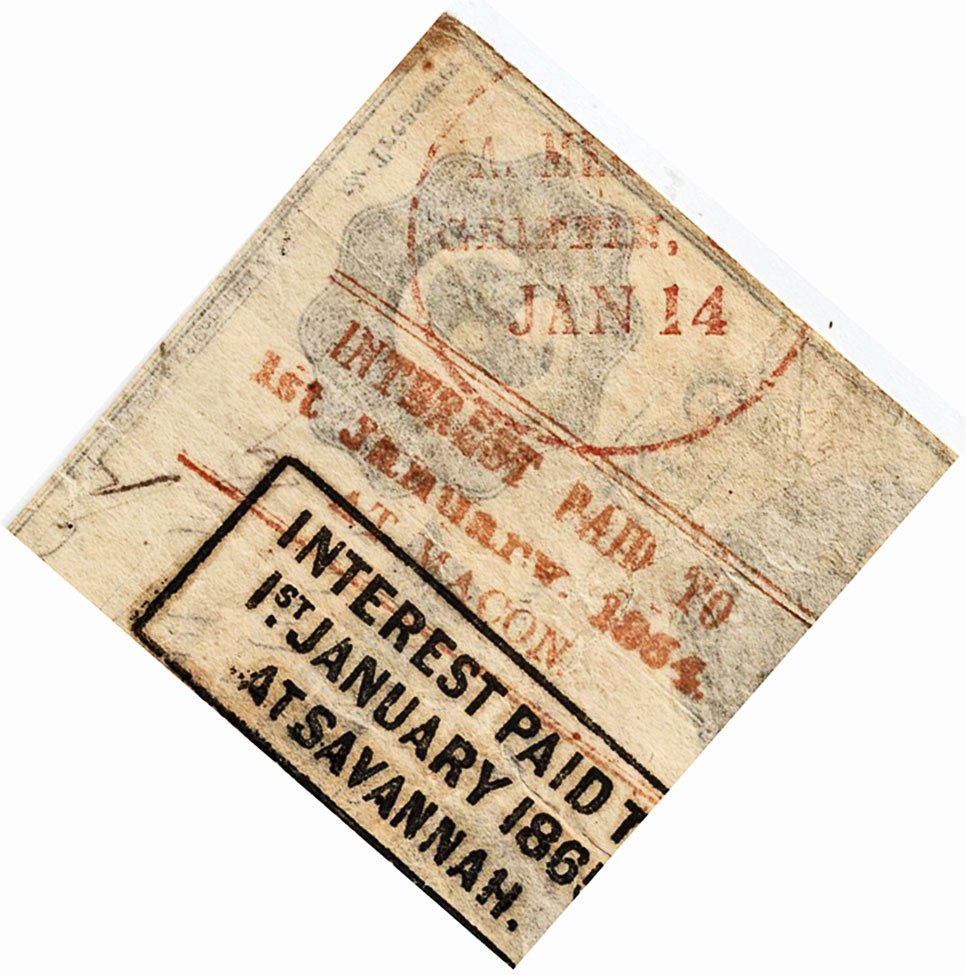 A. Merrit - Griffin Georgia
Commission Merchant Stamp?
No research available at time of posting.
Clearly this is a period piece found on T40 Train 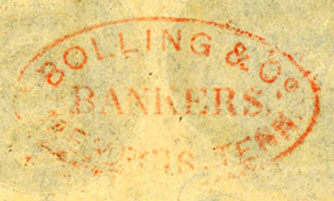 Georgia Insurance Company
This stamp was found on the back of a T41 Hoer.
It is also known on other 730 notes & other CSA type.
Obviously it indicated the note was received, passed and was genuine.
Whether this company had any official connection with the CS Treasury is unknown at this time. 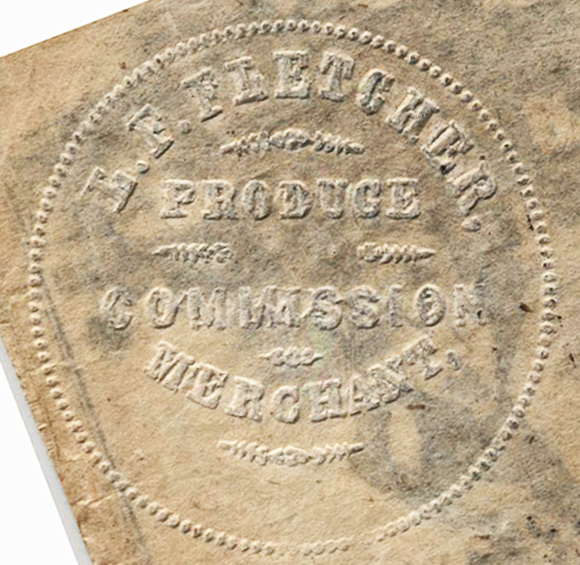 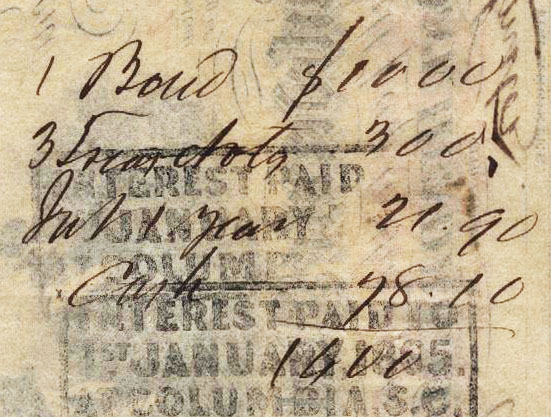 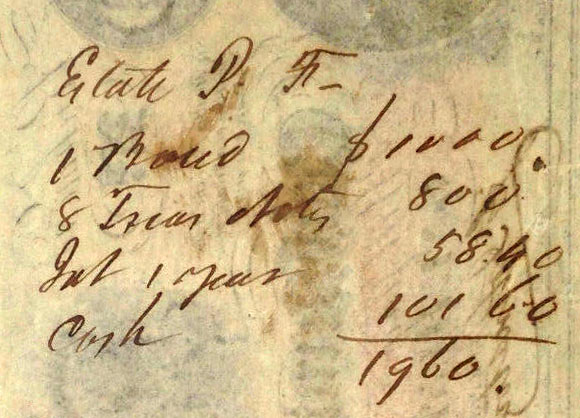 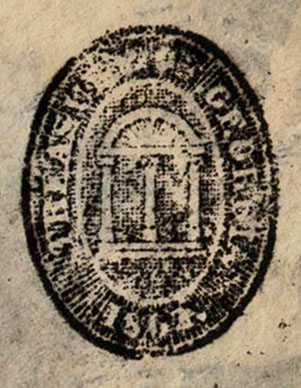 1862 Georgia State Seal
This T40 was issued by T. Sanford depositary Savannah Georgia Nov 20, 1862.
It would pass through the Georgia Treasury where it received this stamp.
Image - Revese Note 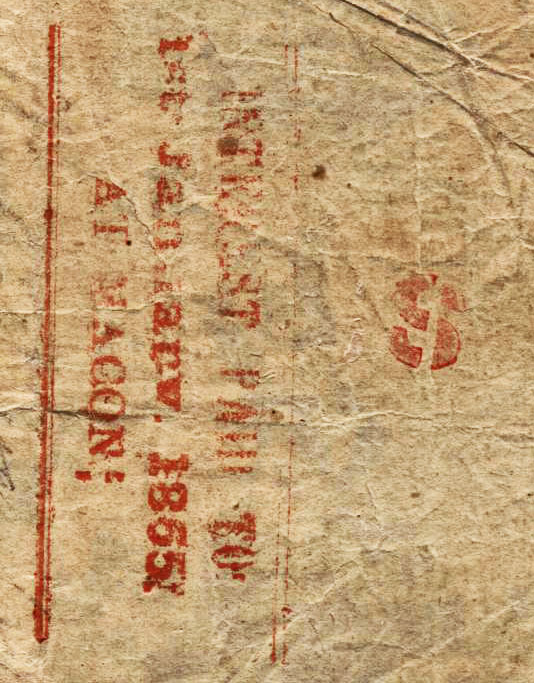 'S' or '$'
Found on the back of a T40 this stamp is considered an oddity.
The purpose for application of the period stamp is unknown!

(Paid Out or From)
Bank of Tennessee

The Bank of Tennessee could have been at Nashville or at a branch such as Knoxville or Chattanooga.  J. G. M. Ramsey was President of the branch at Knoxville and was also a depositary for the Treasury Department.  This handwriting is very similar to his.  This note most likely passed through the bank as a deposit and when it was paid back out a clerk (or Ramsey) wrote the bank's name on the back of the note to indicate origin.  (obv  rev) 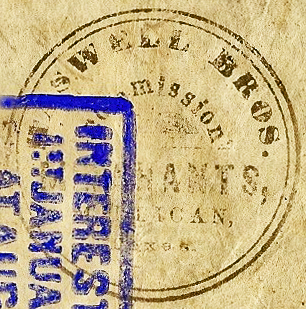 This Haswell Brothers stamp is typically found on 1861 type notes.  It is used like bank stamps to indicate the note was real and state who it was from.  The note this stamp was found on is a T40 issued Houston Texas February 20th 1863.  Was this stamp intended as a ReIssue Stamp?  Was it applied in 1862 prior to the note being reissued or after it was issued in Houston Texas?  I suppose we will never know for sure.  This is the only example known on a 730 Train note as I list it here.  Haswell Brothers was located in Millican Texas; but, their business found them at Hempstead Texas and San Antonio.  They are found in the National Archive as Quartermaster Agents for Texas, New Mexico and Arizona.  Take this link to view a receipt for Orders from the Acting Adjutant General's Office in Houston.  Image

Card found in Rebel Archives
Images of Note:   Front   Back

We can't figure out this Last Name.  We have tried several different spellings of this name with no luck.  If you have some idea what this last name is and/or have some background, please contact our webmaster.

Randy Shipley TM05 made this statement to the Trainmen Group early in September of 2017 regarding "without recourse".  This note that was presented to the Group by Ed Mason TM38.

"Generally speaking, one usually sees "without recourse" placed upon a check or other type of negotiable instrument; however, not circulating *legal tender (in the Confederacy anyway).  All of us know what it means when seen on a check or the like.  Say Crutch wrote me a check for $1000; I gave it to you in payment for something and endorsed it "without recourse".  That would just mean you couldn't come after me if Crutch's check was no good.

To see it on an actual piece of "official" *legal tender is highly unusual.  Either these guys didn't know what they were doing or the signer on the back didn't have much faith in the stability of CSA $$$ (dollars).
An interesting and thought provoking piece.
Randy TM05"

*Confederate Treasury Notes were never Legal Tender; but, they were the "Official" money of that time period! 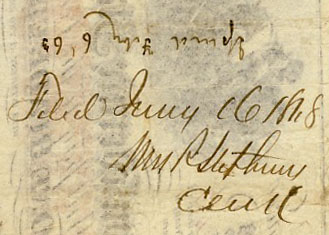 Roger R. Stephens Clerk 1868
Likely evidence or listed asset from a Court Case
On back of Hoer (T41) 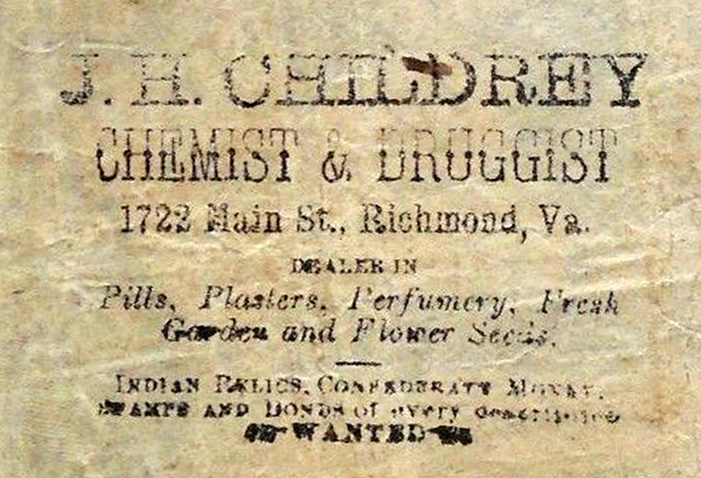 This advertisement tell us that
J. H. Childrey was a
"Chemist & Druggist" 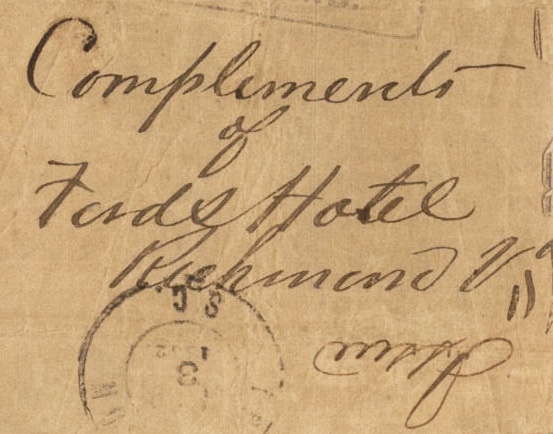 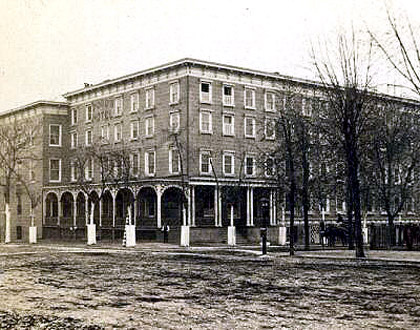 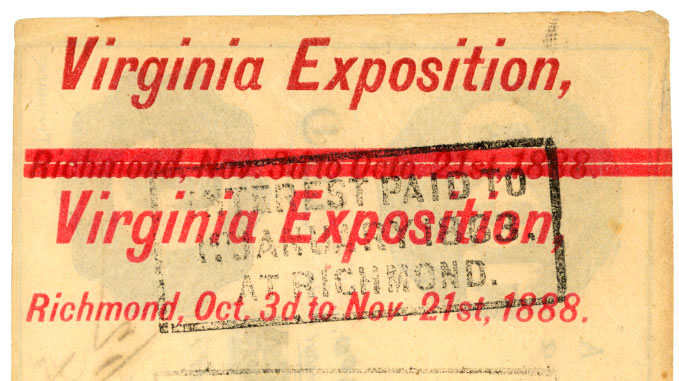 The Great Virginia Agricultural, Mechanical and Tobacco Exhibition.
Richmond, Virginia, October 3rd through November 21st, 1888
This advertisement is found on a T39 Train.
History can be researched on the WWW.

The Northern Immigration and Colonizing  Association of Virginia
This advertising for land by A. O. Bliss dates to 1875-1876.
This is link to ACT Approved March 16, 1875 (Act) or look it up.
Printed on back of T39 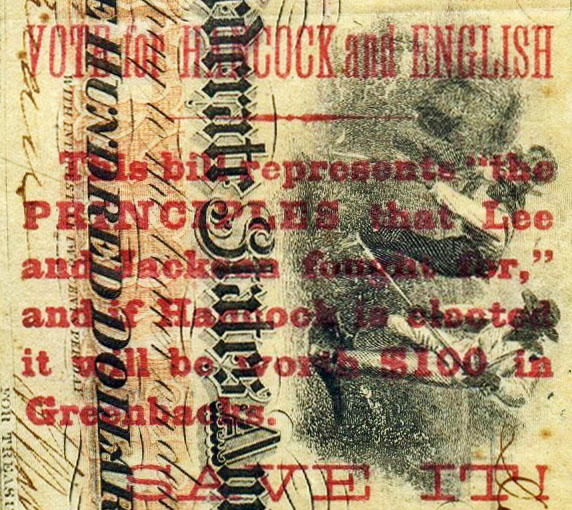 Democratic candidates for President & VP in 1880
There is quite a bit of information on this election on the internet.
Found on T41 - Full Image

Kennesaw, Georgia is located in the Greater Atlanta area.  The name Kennesaw is the Cherokee work (gah-nee-sah) for cemetary or burial ground.  This post-War advertisement is for a railroad rounte and the Southern Museum of Civil War and Locomotive History is located in this city today.  The note used for this advertisment is a T39 (Train) that was issued Oct. 10th, 1862 with Interest Paid 1863 & 1864 at Savannah, Georgia.  Search the internet for other historical information.

R.D. Mann must have had access to a very large selection of Confederate and Obsolete notes.  Quite a few advertising notes with his imprints are known to collectors.  He is found as Agent for the General Rail Road & Steamship located at this same No.4 Kimball House, Atlanta, Georgia on the back of a Mechanics Savings Bank $10 note.  Images of note: [obv  rev]  I find his sentiments on the back where he printed, "Redeemable at Last".
This note was issued December 17th, 1862 by J.U.A.  We believe "JUA" to be John Urquhart Ansley.  He is found as Captain & Military Store Keeper (MSK) and was located somewhere in Georgia during the War.  Image back of entire note. 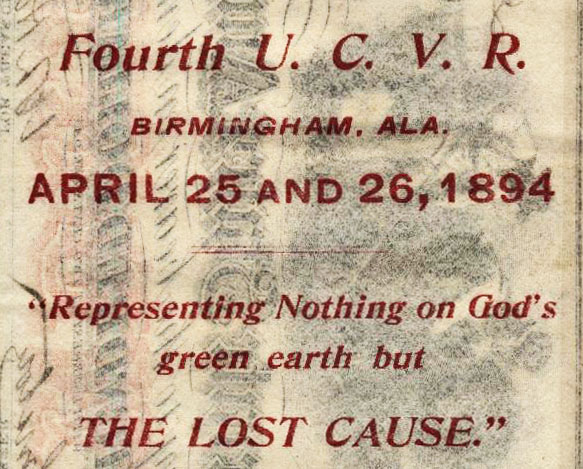 The Confederate Knapsack was a newspaper printed for Confederate Veterans.  It had its beginning in New Orleans with Volume 1, No. 1, published December 1883.  There is no record of how long this publication continued.  It predates the UCV which formally organized in 1890 and was likewise located in New Orleans.  This AD along with the Lost Cause Poem titled This Note was printed on the back of a T41 (Hoer).  Image of full back. 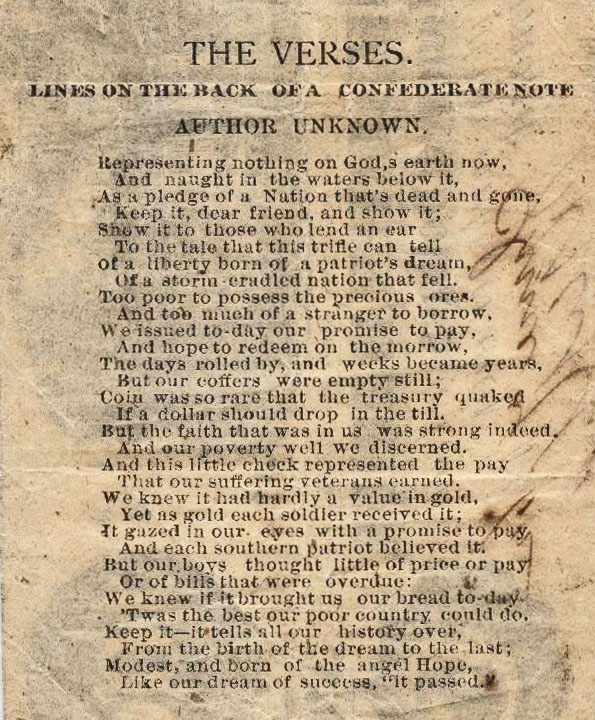 The Verses
c.1890s to Turn of Century

I believe this print to be circa late 1890s to 1907 +/- because it says, Author Unknown at the top.  Major S.A. Jonas of Mississippi was recognized as the author of this poem by the United Daughters of the Confederacy (UDC) in 1907 at their convention held in Norfolk Virginia.  This is just a guess on my part, but the type of print is also consistent.  Black ink was used where earlier items were generally printed with red ink.  Found on T39 (Train) here is image of complete back.  Notice that it has a Mobile Savings Bank stamp imaged with the period pieces. 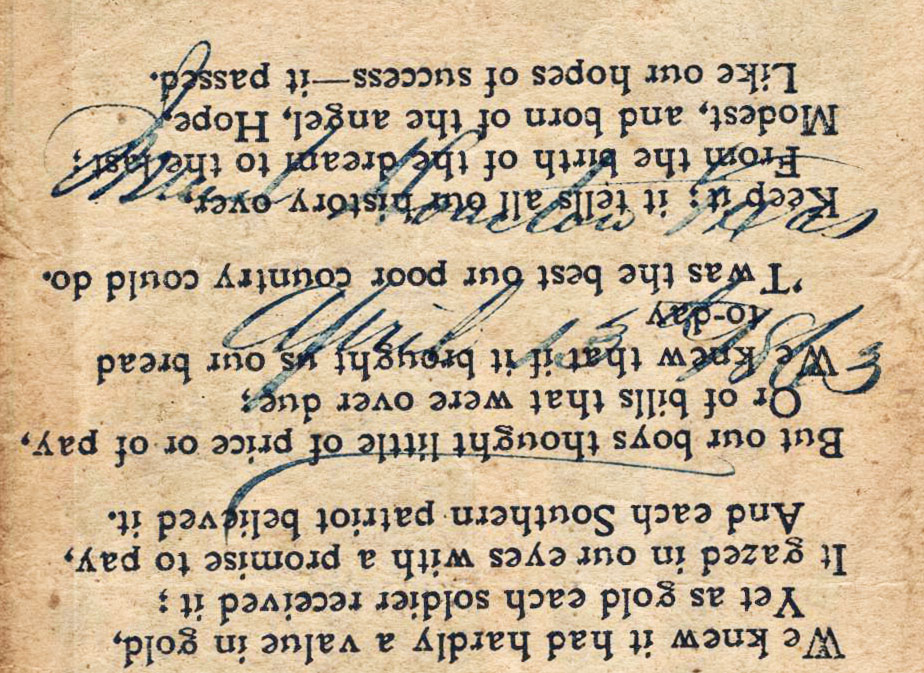 I believe this peom is also Turn of Century or slightly later.  It was printed on back of a T40 (Train).  I included it to show how this scarce Houston Texas issue was overprinted.  Image of complete back of note.
Here is another poem that is printed on back of T41 (Hoer).  I think this printing could be anywhere from 1905 to 1965.  It just looks "newer"; but, there is no way to date it other than by "feel".  Meaning "It's a Mystery".   Image of Poem on note.

There are a few different versions of this poem.  The differences are minor with one or two words different as well as abbreviations and phrasing in the stanzas.  There are a couple versions circa 1875 to 1907 and others still with slight variation from 1907 to peresent day.  I recall reading a newspaper article from around the Turn of the Century where differences were noted during the time they were decided who to give credit to for the poem.

Daniel D. Doolittle
Philatelist
Turn of Century advertising found on back of Hoer (T41)
Dan. D. Doolittle was member #46 of the Philatelic Society of Canada in 1891 and was Vice-President of the Prarie State Philatelic Association in 1902.  He was also member #82 of the American Society of Curio Collectors in 1902.  His specialties were listed as "stamps, coins, antiquated paper money, rare books, papers and almanacs."
He apparently was known internationally as he is recorded as a collector of "numismatica" in Francesco Gnecchi's Guida Numismatica Universale, published in Milan, Italy in 1903. 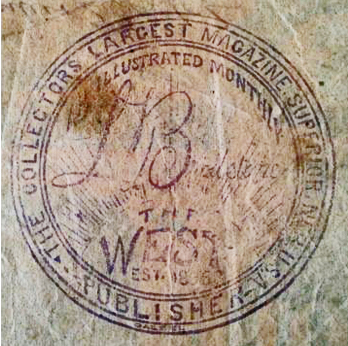 Broadstone began pusblishing his collectibles magazine in 1895 in Superior Nebraska.  Here is image of front page of  The Philatellic West 1903.  There are many clubs coving stamps, souvenir cards and photography listed.  Broadstone claimed there were over 12,000 members represented by all the groups who supported his magazine..  This stamp only says "The WEST".  He claimed that his paper was "The Oldest Collector's Paper in America Published by a Non-Dealer."  Here is an Image of the back of the T40 this stamp was found on.  Here is a token that indicates the name is now Philatelic West and Curio Monthly.  Subscription was 50¢ per year and three years for $1.00.  :

First Day of Issue - 1945
Warm Springs Georgia August 24, 1945.
This Type 41 was used to commemorate the issuance of a US postage stamp.
Image of complete back 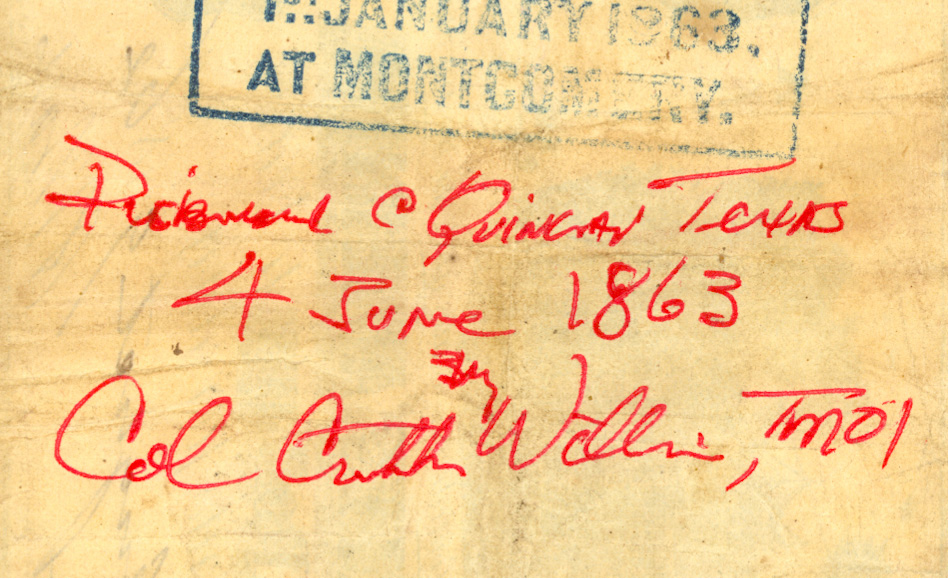 The Memphis International Paper Money Show and many Trainmen commemorated the 40th and last anniversary of the International Paper Money Show at Memphis, Tennessee in June 2016.  The new Trainmen Commander, Roger Adamek, thought it would be appropriate to have the founder of the Trainmen, W. Crutchfield Williams, II, endorse an otherwise unremarkable Train note with his autograph, place of residence, and correct date with a whimsical year.  Many Trainmen attended the show, and photographs taken by Commander Adamek may be seen on the Trainmen website at: 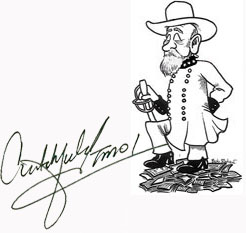 Return to Top of  Page