The most popular way to collect 730 Interest-Hundreds is by Issuing Agent.  The two primary classifications are Military and Civil and we also include a category designated Other.  The vast majority of these notes were issued to purchase supplies.

MILITARY:  These are primarily identified by Rank and/or Title.  The vast majority fall into two groups.  Commissary of Subsistence and Quartermaster Corps.  The most common abbreviation for a subsistence officer is CS and most Com-Sub are Majors.  Those acting in the capacity of this position are listed as ACS for Acting Com-Sub and most with this title are Captains.  There are AACS which stands for Acting Assistant Com-Sub and the rank is usually Lieutenant.  The other more common title is QM for Quartermaster (Major), AQM for Acting QM (Captain) and AAQM (Lieutenant) for Acting Assistant QM.  There are some Sergeants who were QM & CS early in the War and their names and ranks have been found on 1861 non-interest notes.  As I write this I don't recall any Sergeants who issued 730-interest hundreds.  There are other Military titles as well such as Surgeon, MSK for Military Store Keeper &c.
There are some names that don't have a rank or title.  For many years we classified all issuers with no rank stated as Civil; but, the Trainmen have relaxed the way we classify some of those men,  If we can provide adequate background we will sort them to Military.

CIVIL:  Civil agents have titles such as Assistant Treasurer, Depositary (Dep), Collector (Col), Teller &c.  Basicly any named person falls into this category if we can't associate the name for Military purpose.  The truth is that many of the Civil Agents were acting for the Military and in some cases Military Agents acted for Civil prupose.  We have found documents supporting both.  These are by far the most common; but, there are many very scarce examples as well.

OTHER:  This category consists of Any Name for Any Purpose other than Issuance.  It could be a receipt or interest allowed.  Usually there is No Date associated with listings in this category.  Any note you can't sort to Military or Civil goes here!

General Information:   Military & Civil notes will usually say Issued, Re-Issued, Paid Out, Disbursed, but not all do.  To fall into these two categories they must be Dated!  A Date is the Most Defining Requirement for these notes.  The date was used to calculate interest from that point until the time interest was paid (usually 1 January of 1863, 1864 or 1865).  There are Odd Date Interest Paid or Allowed.  Basicly this back date cancles out the registry date on the front of the note for purpose of interest calculation.  There are many notes that bear only a date.  They are considered Issued by the Date.  We have no way to know if they are Military or Civil and with no name they can't be sorted to Person.  They were of course issued by an Agent so a sub-category - Unknown Agent Issued also exists.


What follows are examples of some of these notes.  What follows on this page are only a few samples of the many different Military & Civil Issued 730 notes.  There had been a project carried on by the Trainmen for many years to catalog every reported Issued by Person 730 note.  A book on the subject that included Military, Civil and Other Names was published and released at the Memphis International Paper Money Show June 2010.  Since then quite a few new officers & names have been reported as well as one new location.  The time has come for a new project.

Sometime after Memphis 2014 a new project will begin to bring to this website as many images as possible of each and every NAME (person) found on a 730 note.  We will show the complete reverse and a Cut of the endorsement or stamp.   While most are manuscript, some will be stamp and besides Military and Civil Agent there will also be "Other".  The will be Initials and whenever possible history of the Person, military or civil will also be included.  It isn't known yet if any statement of value will be added or not to the listings.  Most likely we won't provide you with an actual price, but in keeping with past listing, we plan to provide you at least with some indication of how many are known and pehaps a range or a degree of difficulty you may face in locating one of the listed items.  Keep checking this site for news of this New and exciting project!

Some of My Favorites 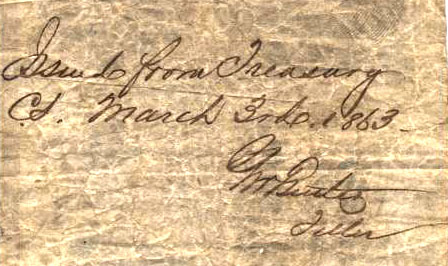 This is a really neat piece and the only one like it that I've seen.

How cool is that?

This officer is also known to have issued notes manuscript.  He is one of the few officers who had a stamp for issuing notes.
Major J. F. Cummings was from Tennessee.

John Boston is common as an Agent Issued note; but, I would like to call your attention to the fact that he has spelled out "Collector"on this note!  This specimen is the only one I can recall seeing with his title spelled out.
Usually his manuscript issued notes are found abbreviated as "Col".  This is a very unusual example from this Collector/Depositary - Savannah, Ga. 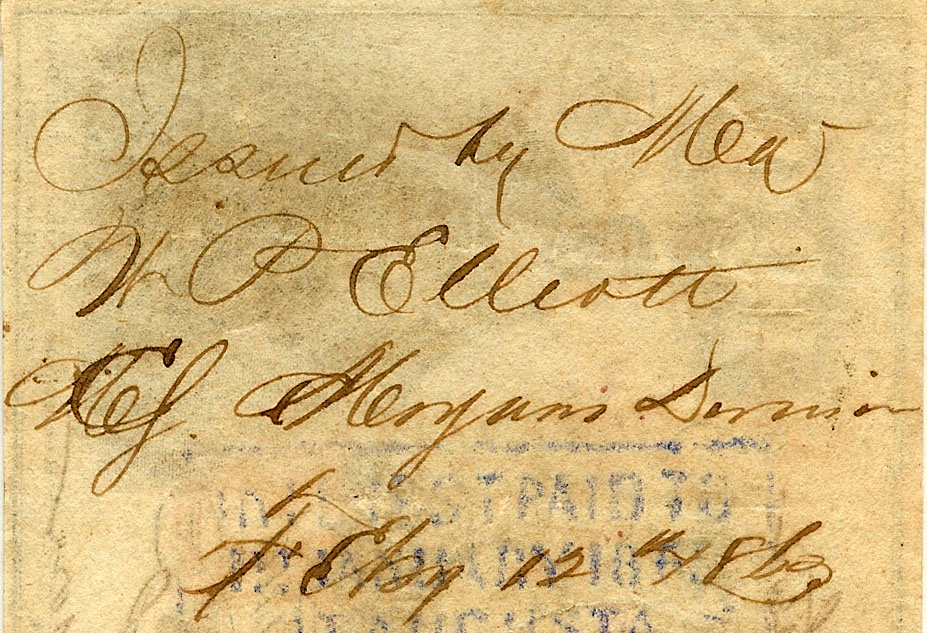 This is an interesting endorsement by Major W. P. Elliott.  It looks like he corrected himself when he placed C over M with S (f)creating CS for Commissary Subsistance.  He probably started to write Morgan's and  he  realized he left out the "CS".  William P Elliott was from Kentucky.  He was Major and Brigade Commissary under General J. H. Morgan.

This endorsement is quite interesting as it states the note is  "From" J. C. Murphy:  He and his brother were prominent cotton brokers in Jefferson Texas.  He was likely acting as an Agent of the Treasury and had some authority with the Cotton Loan Act and procuring cotton to trade for military supplies in the Trans-Mississippi. 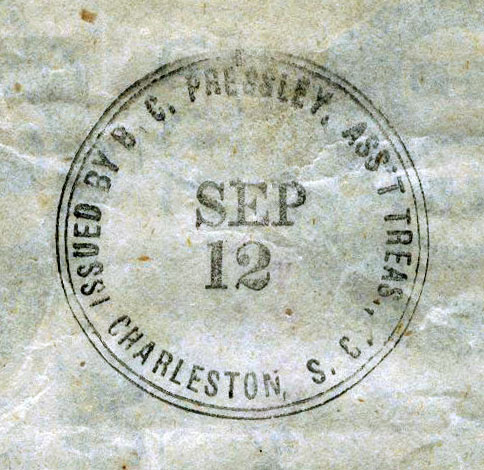 Benjamin C. Pressley was one of two Assistant Treasurers for the Confederate States of America.  This Civil Agent was appointed in 1862 and stationed in Charleston, South Carolina he  was one of the most active early in the War.  This is an exceptional example of his issue stamp. 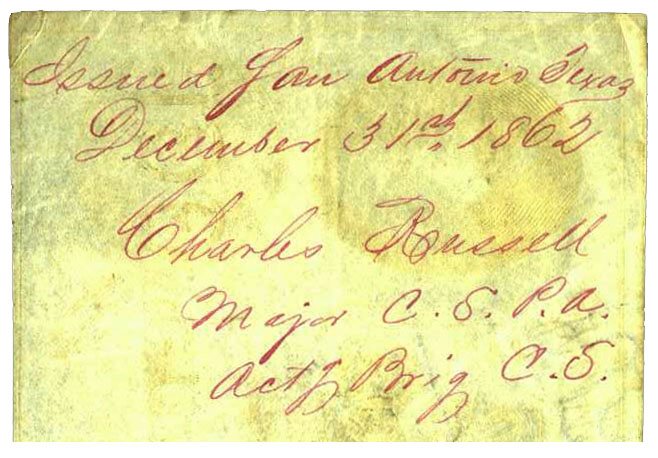 Major C.S.P.A. (Confederate States Provisional Army)  Major Russell was Acting Brigade Commissary of Subsistance in Southwest Texas.  While this note was issued from San Antonio Texas December 31st, 1862, you will find him spending most of his time in the Rio Grande Valley and Mexico.

Major Russell had been US Regular Army and served during the Mexican War.  Maj Charles Russell is found throughout the Treasury Correspondence and spent most of his time as a Treasury Agent. 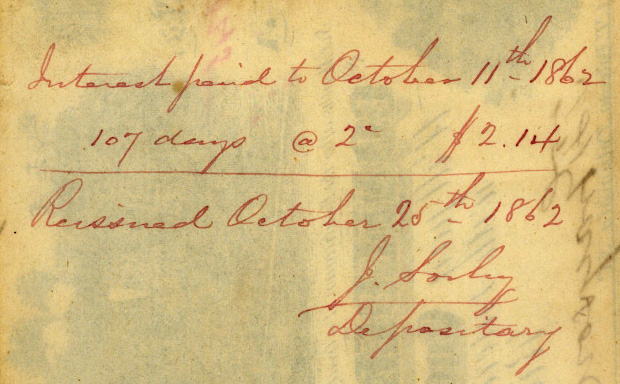 James Sorley was the first Collector at Galveston and eventually  he became Depositary for entire State of Texas.  This is for me the  neatest combined Interest Paid & Issued I've ever seen!  It includes an Interest Paid, the calculation of interest for an Odd Date (107 days at 2 cts per day = $2.14) and then a ReIssued Oct 25th 1862 statement and the J. Sorley Depositary statement.  All is in the same hand and all is in Red Ink which is very scarce.  This is of course a Transmississippi item.  It is the earliest reported date for Interest Paid or perhaps it was allowed.  This note was issued June 26th, 1862 from Richmond.  This note had to be amoung the first to reach the Tran-Miss Dept.

Captain Robert S. Ashby, AQM 7th Virginia Cavalry is found on page 12 of The Book.  This is perhaps the 2nd reported of this endorsement.  The reason this example is one of my Favorites is because it is written Horizontal and extremely large on the back of this T41.  Horizontal Date of Issue are extremely scarce and I have only seen I believe four (4) horizontal military endorsements.  Only one horizontal is displayed in The Book and it is much smaller.  After this endorsement was shared with The Group another officer's was shown as well.  There surely can't be very many of these Fancy Horizontal Endorsements.  This has to be one of my all time favorites!

Other(Person):  Name only could indicated Paid To or Received By and/or To and/or From

Little is known about this man or his business as he isn't listed in the Confederate Business & Citizens file in the National Archive.  He is found in postwar correspondence (lawsuit) and was said to have sold cotton to the French in Mississippi.
Here is LINK to that 1866 document.  This endorsement was found on a T39.